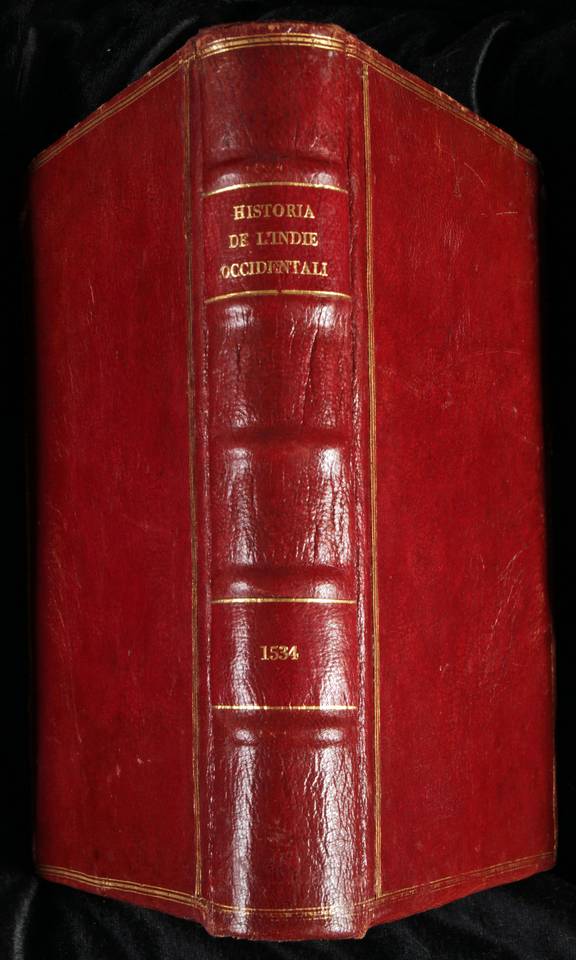 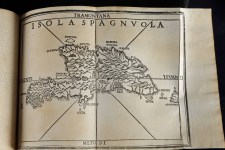 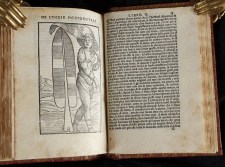 
The first book of this Sammelband, whos Sammler was probably Ramusio is a summary of Peter Martyrs Decades that appeared for the first time complete in its 8 decades in 1530.

Between the first and the second book you will find the woodcut printed map of Hispanola, Isola Spagnuola, in facsimile. The map is missing in most copies.

The second book is a faithful copy of the first edition of Oviedos Historia natural de las Indias Occidentales, Toledo 1526. That first edition is practically unobtainable. The simple drawings printed as woodcuts in the original edition have been copied here, enlarged and supplied with details of plants and persons. These are all very early images out of the New World.

The last leaf of the Oviedo text is a curious colophon, giving the date of printing (December 1534 in Venice), claiming a 20 years copy right and explains the origin of the map of all the West Indies, that is supposed to be added to the book. However, of this famous map, tutto questo mondo nuovo... (Burden 10), only two copies are known to survive, one in the New York Public Library and another, contemporary colored one in the John Carter Brown Library.

The third and last book of this Sammelband of Americana is one of the earliest printed reports on the conquest of Peru by Francisco Pizarro. The author of this report came to Spain with or WAS Hernando Pizarro, Franciscos brother. His ship arrived in Sevilla in January 1534 with loads of presents in gold for the Emperor.

Earliest letters mentioning the fall of Peru to Pizarro

It would appear that the oldest surviving printed version of this letter is the German New Zeitung aus Hispanien and Italien of February 1534; the second an imprint in Spanish by Bartolome Perez in Sevilla in April of that same year; a third added to the second edition of Bordones Isolario in June 1534, and ours be the fourth in October 1534. In between the same Bartolome Perez printed Pizarros secretarys Francisco de Xeres report under the title of the Verdadera relacion de a Conquista del Peru en Julio 1534.