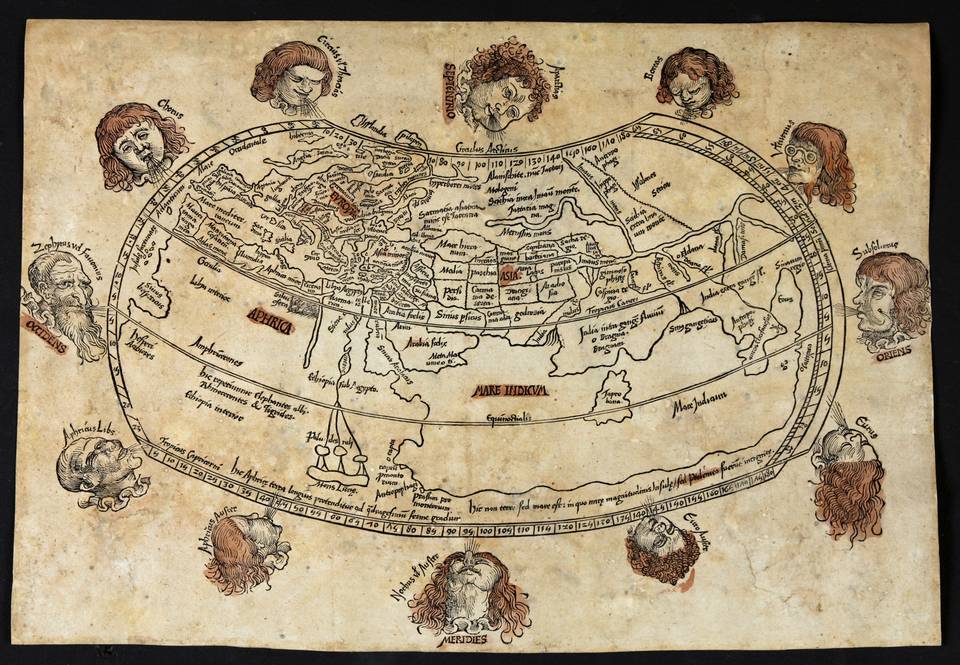 (no title but) the World

In spite of the wormholes the map is a beauty and practically unknown with contemporary color.


One of the earliest, post-Ptolemaic worldmaps, surrounded by the twelve wind heads. Important as it shows the transition from Ptolemaic to modern cartography as it developed based on the results of the voyages of discovery. The land mass enclosing the Indian Ocean and connecting Africa with Asia is still there but carries the following text:

Hic non terra sed mare est in quo magnitutes insulae sed Ptolomeo fuerunt incognitae, this is not land but sea in which lay many islands that were unknown to Ptolemy.

This drawing and the statement are intrinsically contradictory not less than the famous painting of a pipe by Magritte that states: ceci nest pas une pipe!! It shows the hesitation in Europe to absorb and accept the impact of the rounding of Cape of Good Hope by Vasco da Gama in 1498, only five years previously to the making of the map. There were other shocking developments coming like the first appearance of any part of the Americas on a printed map in 1506.

Georg Reisch was professor at the University of Freiburg and took part in the early discussions on geography in Germany with Waldseemüller and others. His Margarita Philosophica is a highly attractive book that gives an illustrated overview of thinking in Europe around 1500 in all fields: theology; philosophy, but also natural sciences; medical science and geography. Our map is part of the very first edition of this book, the Scott, 1503 edition at Freiburg.