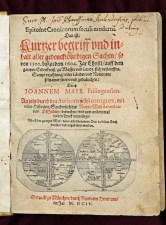 
The small double hemisphere worldmap is worth studying. It is a copper plate engraving. The prime Meridian is at Tenerife. Both hemispheres are split in quarters by a broad band as meridian and equator which leads to a deformation of the continents. Both Poles consist of land and further North (and South) there is sea again. The map suggests both poles are actually water surrounded by land and ice. The southern Pole, around und under the Circulus Antarcti, comes twice further North than the Tropic of Capricorn, once under N. Guina (sic) and once under Java. The land mass is called Terra Incogni(tum). Other names are Fuego (under the Americas); Psitaco(rum) region under Africa) and Beach, Lecath (Lucach) and Maletur (under Java). Japan is connected to China

In Europa: Hispan(ia) and Russia

The map seems to be of Italian design (stippled Oceans, spelling of the names; fine lettering, but Italy is NOT shown on the map. It is so rare that Shirley mentions the map but has not seen one and no image in his standard reference work. One could still think the failure to show Italy, or the land connection of Japan are due the small scale of the map. The open sea at the South Pole however, is on purpose and quite unusual for the time.