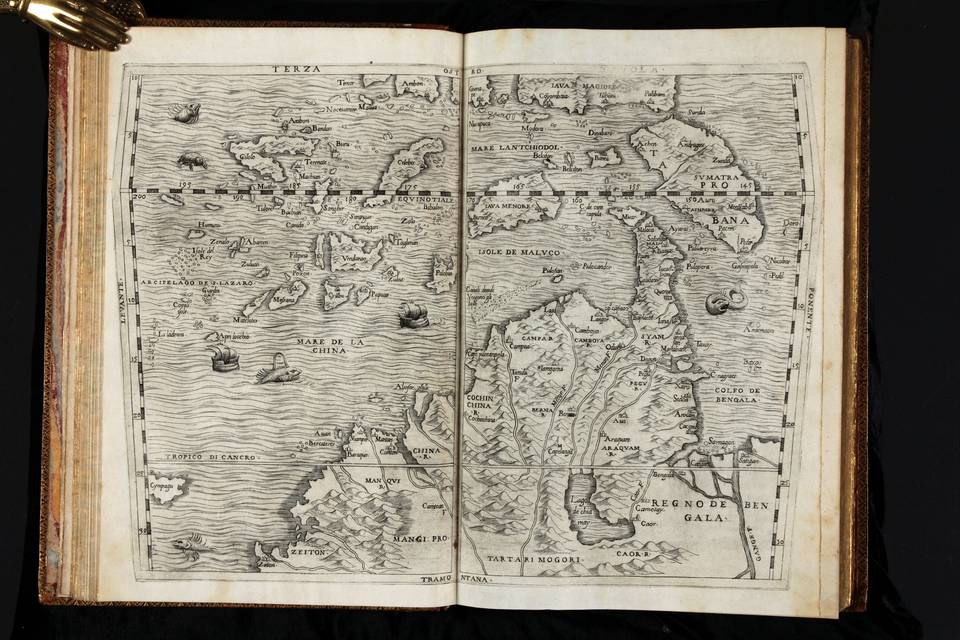 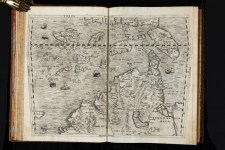 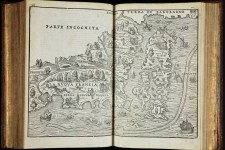 In folio, 3 Vols, uniformly rebound in the XVIII century in full calf.

Description : One of the earliest and certainly the most broad collection of the European voyages of discovery, first published between 1550 and 1559 The language is Italian. The first volume is dedicated to Africa & Asia plus Transylvanus and Pigafettas report on Magellans circumnavigation; the second volume is dedicated to Asia including Poland and Russia. The third volume is exclusively dedicated to the Americas.

The Ramusio collection is only preceded by Montalboddo (1507) and Huttich/Grynaeus (1532) as a broad overview of the early voyages of discovery It went through 6 editions (Vol. III only 4) between 1550 and 1613. The collection is illustrated with maps and plates. The original woodblocks were destroyed in the fire at the Giunta printing office in November 1557. The maps were thereafter re-engraved in new woodblocks with only slight differences and or in copper plates.


Giovani Ramusio, a Venetian, worked for the Government (secretary of the Council of Ten) most of his life. He travelled extensively and became knowledgeable in geography and choose the right friends. Ramusio was more than a collector. He translated the original texts himself into Italian. He also wrote short chapters to comment on the importance and trustworthiness of the stories told. Giacomo Gastaldi designed his maps.

This volume contains 45 treatises on the European discovery of Africa and Asia plus the circumnavigation by Magellan. There are 3 maps: Africa; Asia and the Far East.

As it should be the book starts of with the description of Africa by Leo Africanus and the Voyages of Cadamosta (1455&1456) and da Sintra. Other noticeable Africa voyages are the Pedro Alvarez and Francesco Alvarez (Ethiopia) treatises on the origin of the Nile and the role a Prester John in Ethiopia. On Asia there is the journal of Vasco di Gama, the book of Varthema (Barthema Bolognese) and Eduardo Barbos book on Asia and de Barros book on the Portuguese conquest of Asia. Finally both Transylvanus and Pigafettas book on Magellans circumnavigation are there. It is noticeable and valuable that Ramusio gives commentaries himself or allows others to do so.

This volumes starts of with Marco Polos three books with commentaries. It then mainly concentrates on Venetian voyages to Persia, Tartaria and Cathay (China) and some shipwrecks. There is also Giovios: Moscovia. Two parts are added in these later editions of the second volume: essays on Moscovia & Persia including Oderics voyage; essays on the Zeno brothers exploration North and Sebastian Cabots voyages North and finally two texts on Sarmatia (Poland) by Alessando Guaninno and the other by Matteus de Michovo (Michov)

This volume starts with texts of two famous contemporary historians of the Spanish conquest of the Americas: Peter Martyr and Gonzalo de Oviedo. Martyrs text is the translation into Italian of his Enchiridion that appeared in Basel in 1521. Oviedos two best known works are translated here: his Historia natural de las Indias (1526; Harrisse, 139) and his Historia general de las Indias (Harrisse 139) of which the first 19 books were published by Cromberger in 1535. These are followed by the second, third and fourth carta de relacion by Hernan Cortes. Further the long ordeal of Cabeza de Vaca in the Southern USA; the explorations of Vazquez de Coronado from the Colorado river up North; Xerez report on Pizarros conquest of Peru and Oviedos version of the exploration of the Maranon (Amazon)

The maps & prints in Ramusio

The maps are typical tabulae modernae, maps that show the discoveries after Ptolemy. As Ramusio himself tells us in his dedication to Girolamo Fracastoro: Your excellency has extorted me that I should make or have made four or five maps of the new world, after the manner of Ptolemy, but including whatever has become known up to the present, namely the coasts added to navigators charts by Spanish pilots and captains. Moreover you have sent me a map which you received from Gonzalo Oviedo, Imperial Historian, including the maritime possessions of New Spain and the islands of the North Atlantic as well as Brazil and Peru in the South Atlantic. I arranged that Giacomo Gastaldi, an excellent cosmographer, should reduce to small scale a universal map (that is world map) etc (quoted from Karrow, 1999, page 229/230)

The first edition of this map is 1554 in woodcut. Ours is a later printing. Africa upside down (north at the bottom). Latitude and longitude scale. Copper plate engraving. According to Betz the information used for the map came from the manuscript of the Leo Africanus (printed in 1556 only) and Montalboddos Paesi novamente retrovati. The map has various firsts, among them the first printed map in a book showing Madagascar (San Lorenzo); the first showing Lacus Niger. The map also shows the southern tip of Africa in the correct place: 54 degrees East (instead of 64 degrees East on previous maps).

India & Indian Ocean, upside down. The first edition of this map is 1554 in woodcut. Ours is a later edition cut in copper plate. Latitude and longitude scale.

South East Asia and Far East, upside down. First edition of this map is 1554 in woodcut. Ours is a later edition cut in copper plate. Latitude and longitude scale. This map is an important map of SE Asia. See for an extensive discussion of the influences of Magellan, Abreu & Serrao, Loyaza and Salazar on this map Suarez, 1999: The mapping of SE Asia, chapter 11.

After the first printed map of that city in 1524

One of the earliest printed maps of Brazil (only preceded by Gastaldi, 1548), here in its third state. "Terra non descoperta" in first state "discoperta"; page number

Map of the western hemisphere. Woodcut, third state of this map. The map is the first to show the places, visited by Francisco Vasquez de Coronado, the first European to travel the North American South West, looking for the cities of Cibola and Quivera. Also the Sierra Nevada (California, Juan Rodriguez Carillo, 1542) is depicted for the first time.