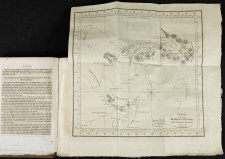 Three parts in one volume

Title on paper label on the spine

16 copper plate engravings of which 15 in contemporary color

1-240:    Mainly Adelbert von Chamissos exploration of nature and Pacific languages in the style of his contemporary Alexander von Humboldt.


Otto von Kotzebue (1787-1846) was a naval officer and discoverer at the service of Russia. He was born in Reval, now Tallinn, Estland. Between 1803 and 1806 he sailed under von Krusenstern the Pacific visiting Japan and China. Ours is the report he wrote as commander of a second Russian voyage around the world between 1815 and 1819. This voyage was financed by the Russian count Nicolae Roemjanev. Its purpose was to find the passage north of Russia but this time entering form the East, not the West and the exploration and mapping of parts of the northern Pacific. A first exploration concerned Kamchatka; Behring Strait and Alaska. A later part of exploration covered Hawaii and the Marshall islands.