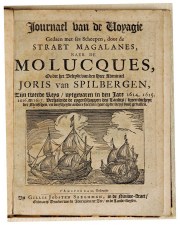 In verso: full page portrait of Spilbergen in woodcut frame

8 text plates: one copperplate engraving, taken from Hartgens edition and 7 original woodcuts. Including the DODO


Spilbergens was the fifth circumnavigation ever after Magellan; Drake; Cavendish and van Noordt. The voyage took place between 1614 and 1618. Spilbergen was an accomplished admiral who had sailed for the VOC to the Indies (Ceylon) before. He was sent again by the VOC to discover new territories, chart the Magellans Straits and damage Spanish interests in South America and the Philippines where possible. He landed in Brasil, mapped Magellans Strait, fought Spanish settlements in Chile, Peru and Mexico and sailed to the Philippines. Once in Batavia he picked up le Maire and the rest of his crew who had been arrested in Batavia for breaching VOC laws by sailing to the Indies without VOC consent. Le Maire denied this as he did not sail through Magellans Straits (as specified in the VOC laws) but around Cape Horn!!

This is one of the rarest editions of Spilbergens voyage around the world, especially complete with title page, portrait and text engravings. The original text was not written by Spilbergen but by one of his captains, Jan Corneliszoon May, but was authorised by Spilbergen before it was published (Tiele 1969:70). To the first publication in 1619 the le Maire text of his discovery of Cape Horn was added which is not the case in this particular edition by Saeghman.