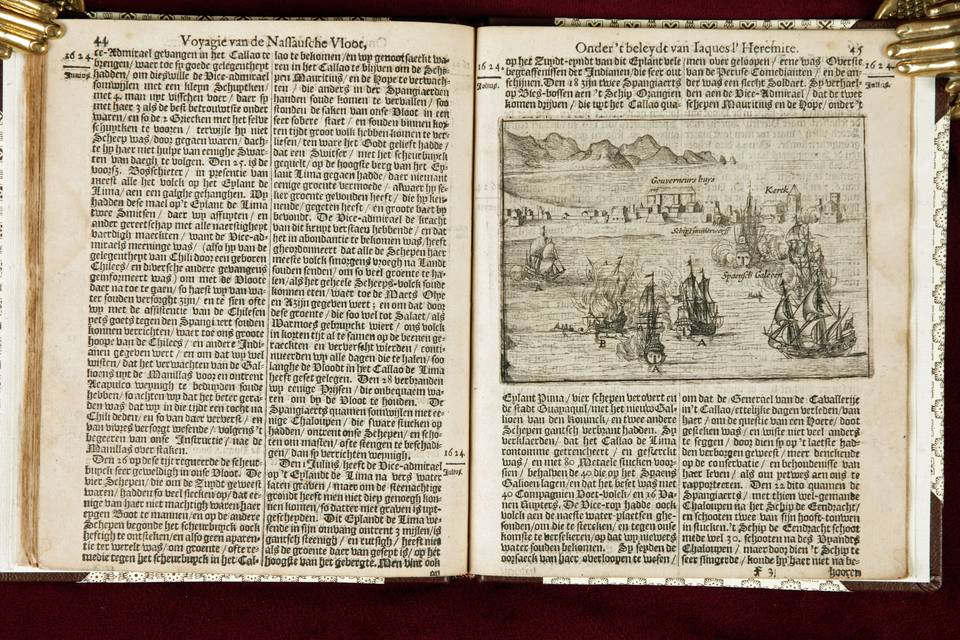 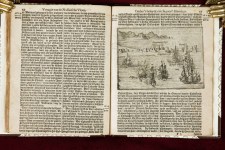 In small quarto. Modern half calf

Two books in one volume


Spilbergens was the fifth circumnavigation ever after Magellan; Drake; Cavendish and van Noort. The voyage took place between 1614 and 1618. Spilbergen was an accomplished admiral who had sailed for the VOC to the Indies (Ceylon) before. He was sent again by the VOC to discover new territories, chart the Magellans Straits and damage Spanish interests in South America and the Philippines where possible. He landed in Brazil, mapped Magellans Strait, fought Spanish settlements in Chile, Peru and Mexico and sailed to the Philippines. Once in Batavia he picked up le Maire and the rest of his crew who had been arrested in Batavia for breaching VOC laws by sailing to the Indies without VOC consent. Le Maire denied this as he did not sail through Magellans Straits (as specified in the VOC laws) but around Cape Horn!! The Schouten version of his voyage with le Maire is no part of our volumes. Instead the voyage around the world by l Hermite is added, apparently to unite Dutch circumnavigations.

Jacques l Hermite was sent out to attack the Spanish possessions and frustrate the Spanish dominance in the Pacific, considered by Spain a Spanish lake. Spain and the Netherlands had just finished a 12 years truce (1609-1621) in a war of independence that took 80 years (1568-1648). LHermite sailed in May 1623 and returned in January 1626.

In 1625 two letters were published in Holland, translated from Spanish, that recount the information of the first parts of l Hermites voyage given by a Dutch sailor, taken prisoner of war in Lima. The first full publication was by Gerritszoon and Wachter in Amsterdam in 1626. That book had 9 plates. A second edition of that book forms part one of another publication by Wachter in 1643. In 1646 a third edition is included in the Commelin series of Dutch voyages. In this 1646 edition a description of Peru is added plus a letter by de Quiros. Ours, the fourth edition is complete in itself, missing the 1646 description of Peru (pp 61-70) and Keyes description of Guyana.