A Map of the Discoveries made by Capt. William Dampier in the Roebuck in 1699


"... This discovery of Captain Dampier that the Country he named New Britain was an Island is of very great importance, since it lessens the Difficulties of settling a Colony in this part of the World that might probably be attended with great Advantages, as well with respect to the profits drawn from the Plantations as from the Commerce of the neighbouring Countries...."


An exact copy of the map of the Chart of the Southern hemisphere, published in Forster's English edition of a Voyage around the World. Our copy from the slightly later German translation lacks the surrounding texts, found in the English version of the map. George Forster, son of Johann Reinhold Forster, who participated in Cook's second voyage (1772-1775) to find the famous South Land. The your Forster was a brilliant writer and botanist. His book: J.R. Forster A Voyage Around The World (London 1777) was translated in German and published under the title Johann Reinhold Forster's Reise ... 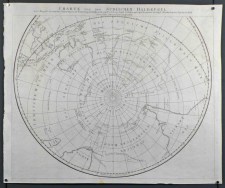