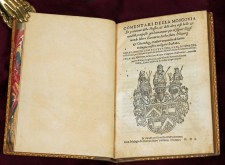 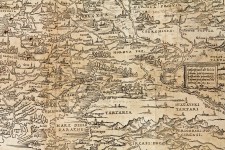 
First edition in Italian of Herbersteins groundbreaking description of Moscovia. The Latin edition preceded this one with one year.

Siegmund, Freiherr von Herberstein (1486-1566) was an Austrian nobleman who made two trips as Ambassador to Russia, one between 1516-18, the other in 1526/27. Based on the 16 months he spent there he wrote the first comprehensive work on Moscovia, published in the West. Paolo Jovis Libellus of 1525 was second hand, that is based on data provided by the Russian Ambassador to the Pope Gerasimow. I travelled the country with curiosity and wide open eyes (Henze, 183, pp 560/70) but he also used Russian sources he had access to by his knowledge of Slavic languages.

The map, Descriptione de la Moscovia per Giacomo Gastaldi.... MDL, is an enlarged version of Gastaldis map of 1485, who in turn based himself on Gerasimows map, included in Paolo Jovis Libellus of 1525 of which only one copy was ever seen and described (Meurer, 1987)