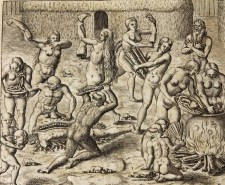 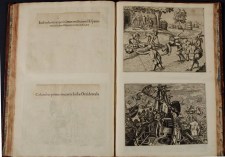 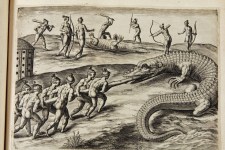 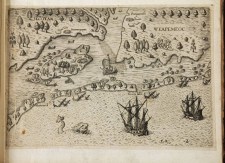 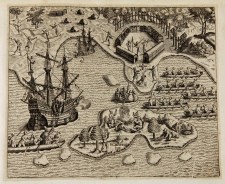 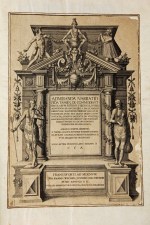 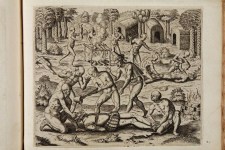 Album of the Plates by Theodor de Bry


Grands Voyages, parts I; II; III and IV in Latin

Title on the spine: Narat(io)....Virgin(iae)

Other plates: Noah; Vespucci and Columbus

132 plates, telling the stories from the first four books


The quality of the prints is exceptionally good, sharp, rich in contrast, highly differentiated. Obviously prints drawn from plates rarely used, that is first editions, first issues. This corresponds with the title pages used. The series are complete, covering part one: Virginia; part two, Florida, part three Johann von Staden (only) in Brazil and part four: Girolami Benzoni on the Spanish colonization of the Caribbean and Central America.

So about 250 years ago, probably in France a person owned a set of the Grands Voyages by Theodor de Bry in nice, first editions. That person decided he or she was only interested in the plates, avoiding the difficulties of the Latin text and still telling the story. This person set himself to neatly cut out the plates and the titles of the plates. Thereafter, he carefully pasted them into an album and had that album bound in full calf. No maps. The French have a name for this procedure un receuil factice, a made up collection. The existence of a specific name indicates that collecting like this was not uncommon at the time.

Each of the four books opens with the engraved title page, then one or more plates that are related to the story told but not representing it, for example the coat of arms of a sponsor of the voyage, and then the plates of the voyages related.

The complete books by the Bry, first editions of the Virginia and Florida parts, sell at prices between 50 and 250.000 US. Loose plates at 150-300 US a piece. A complete run of these and the plates of the other two books mentioned, never appears on the market.

It is an experience to leaf through the stories of these early voyages and settlements in the Americas, told and covered by these famous old prints which have been repeated over hundreds of years and have influenced the European view of the Americas for such a long time.