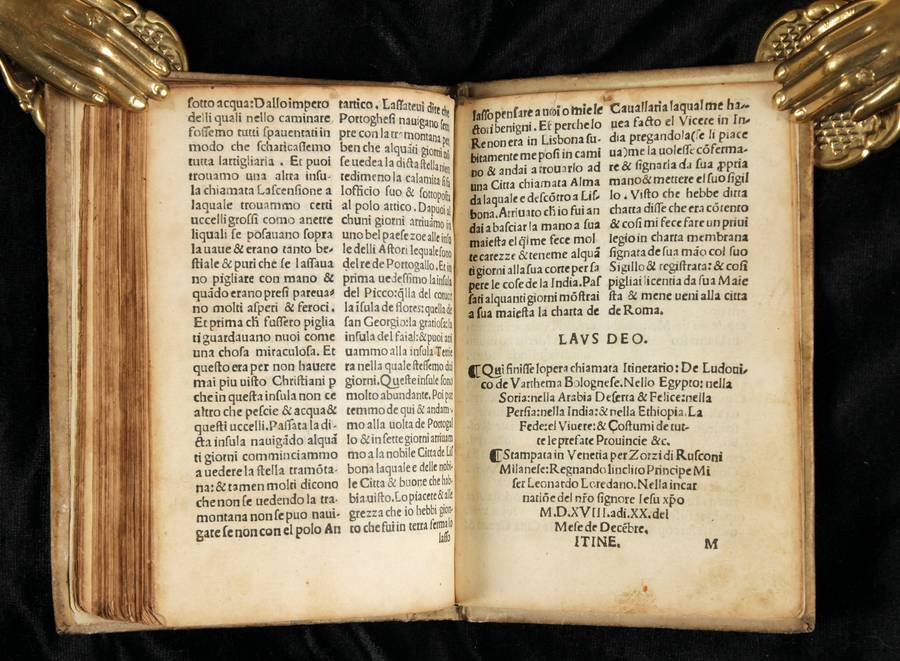 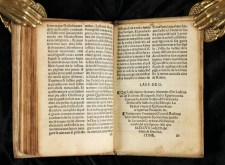 Title in manuscript on the spine

Varthema is one of the best known and earliest documented traveller to the Near and Far East, comparable to Marco Polo. He started by travelling through Egypt to Aleppo (February 13); Damascus (February 25) ; Medina (May 11); Mecca (May22) and Jeddah (June 14) of 1503. He travelled further in Yemen between July 1503 and March 1504, where he was taken prisoner for a while. Varthema travelled further to Persia and India (1504, 1505); Malacca and Sumatra to reach the Spice Islands (Moluccas) in May 1505. He returned to Italy via Malacca, Calicut; Cochin, Mozambique, Lisbon arriving in Rome in December 1508 . His book, the Itinerary, was first published in Italian in December 1510. It was translated in many languages and reedited many times. The early editions, like this one, the third edition in Italian) are all extremely scarce. In the USTC, United Short Title Catalogue under nr 862067, only mentions 4 copies in the world: Messina; New York, Oxford and Siena.

The book is of great importance to the Arab world. It contains the first recorded visit by a Christian to Mecca. Dressed as a Muslim Varthema visited Mecca. He visited the grave of Mohammet (leaf B 2); travelled to Mecca; describes the city and its holy places and its trade, thereafter the trip overland to Jeddah, the harbour of Mecca (C2). Overall 8 leaves, 16 pages of text are dedicated exclusively to Medina, Mecca and Jeddah.

Penrose, B. Travel and Discovery in the Renaissance, pp. 28-32