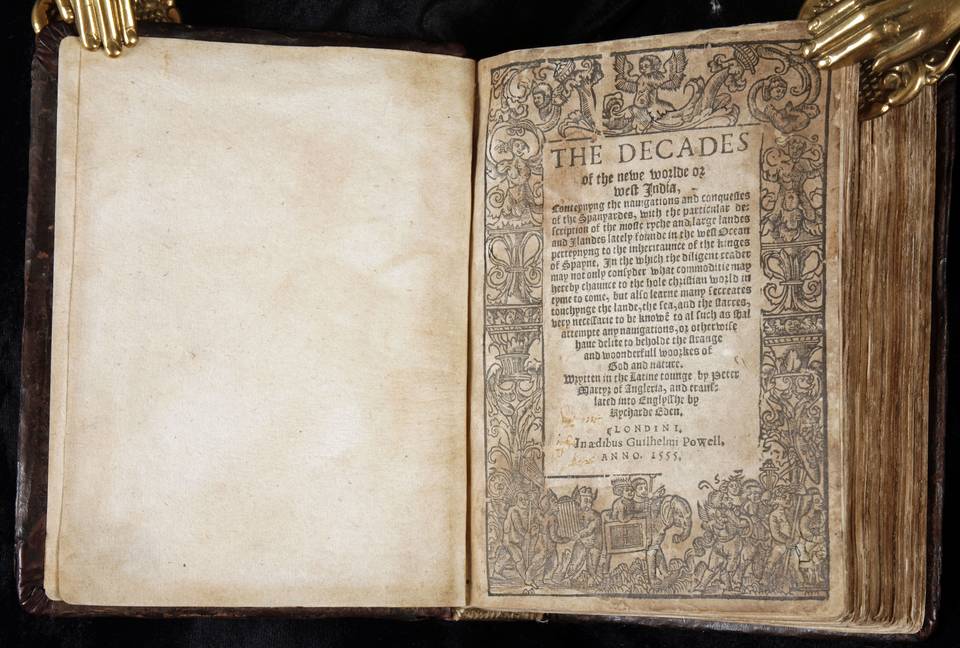 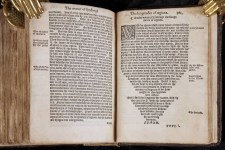 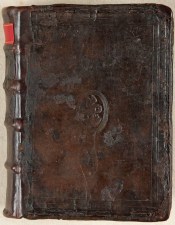 THE DECADES of the newe worlde or west India...

the navigations and conquests of the Spanyardes...

large lands and Islandes lately found in the west Ocean...

Contemporary calf binding with English blindstamp on both covers:

a pelican plucking blood from her breast to feed her young. Spine renewed

The blind stamp on the covers shows a familiar religious image: the pelican feeding her children with her own blood. An expert on early English bindings, dr. David Pearson of the Rare Book School at Cambridge University (UK), tells us it is a late XVI century English binding. The image does not necessarily indicate the owner, printer or binder. The text around it needs further study but we read ..keepeth the law........good to the common wealth. The first is a quote from the bible, the Proverbs (29-18) the latter a quote from the Magna Carta.

A later (1685) manuscript note gives the name of the owner as Richard Dyer not further identified.


The first three English books on America, 1511-1555 as the compiler of a modern edition, Edward Arber, calls the book. This is the first Sammelband of the most important sources of the voyages of discovery by Spain to the Americas in the English language. Its main corpus is the translation of Peter Martyrs first three Decades, as published in Spain in 1516. It also embraces Vespuccis discussion of the South Pole stars; Magellans voyage around the world; Lopez de Gomara and Oviedo early histories on the Americas. It also includes the Popes bull of 1493, dividing the world to be discovered between Spain and Portugal and the discussions at Badajoz (1524) and Zaragoza (1529) that lead to the lease of the Moluccas to Portugal in 1529. Finally and on voyages to Moscovie.

The first decade is dedicated completely to Columbus first three voyages to the West and the so-called minor voyages by Alonso Nino and the Pinzón brothers. The second decade follows Ojeda and Juan de la Cosa in northern Paria (=South America) and Vasco Nunez de Vaca and Enciso in Central America; Valdivia in the Darien and Pedro Arias in Central America. The third decade tells us about Vasco Nunez de Balboa in Central America and his discovery of the Pacific. His meetings with the caciques Thumaco and Chiapes, name givers of their respective regions.

The fourth chapter of book three is dedicated to the fourth and last voyage of Columbus following the east coast of Central America upwards (Veragua). It reports on Sebastian Cabots exploits in the North for the British; on the first voyage south under Juan de Solis in 1512 and the discovery of Florida by Juan Ponce de Leon in 1513. There is a long description of Isla la Espanola and other Caribbean islands. The chapter ends with the second voyage by Solis south 30 degrees (la Plata river) in 1516.

Of Richard Eden Sabin says: ...Nor was he a mere compiler. In point of learning, accuracy and integrity he is certainly superior (and earlier) than Hakluyt. Eden did not consider the Brits the best of discoverers. In one essay he writes on Sebastian Cabot: The Voyages of that worthy owlde man, Sebastian Cabote, yet lyvinge in Englande...! (Sabin)

To give an impression of the rich and varied content of the book I will quote from the 1971 Kraus reprint:

The first three Decades as published by

Peter Martir in Alcala, Spain in 1516 translated for the first time in English.

Then: Papel Bull, Et caetera, from leaf 167 onwards the Bull dividing the New World between Portugal and Spain (May 4, 1493)

Fernandez de Oviedo, The natural history of the West Indies. Originally published in Spain in 1526. pp.173.v-214v.

Amerigo Vespucci Of the pole Antartike and the stars above the same... 244v-248v. with two full page woodcuts.

Moscovi and Catay and including a description of the northern regions, Iceland and Greenland by among others Sebastian Munster; Jabobo Gastaldi and Jacobo Ziegler.

Lopez de Gomara: History of the Indies and

Sebastian Cabot on the roundiness and biginess of the earth and the lengyth of a degree.

On Metals, Biringuccio: the generation of Metals and

Richard Eden: on Guinea; on Afrikke and

Market: Since 1885 only 4 copies of the book were offered for sale at auction. The copies offered in 2009 and 2013 were incomplete and in bad condition. The copy of Frank Streeter, the son, was sold in 2007 for 650.000 dollar exclusive auctioneers costs at Christies NY. Another copy remained unsold at 180.000 dollar excluding costs. That copy was not in a good condition either. Recently there was a copy on the market in Australia for 240.000 US.

With many thanks to Ngaio Vince-Dewerse and David Pearson, from Cambridge University Library and Cambridge Rare Book School respectively.