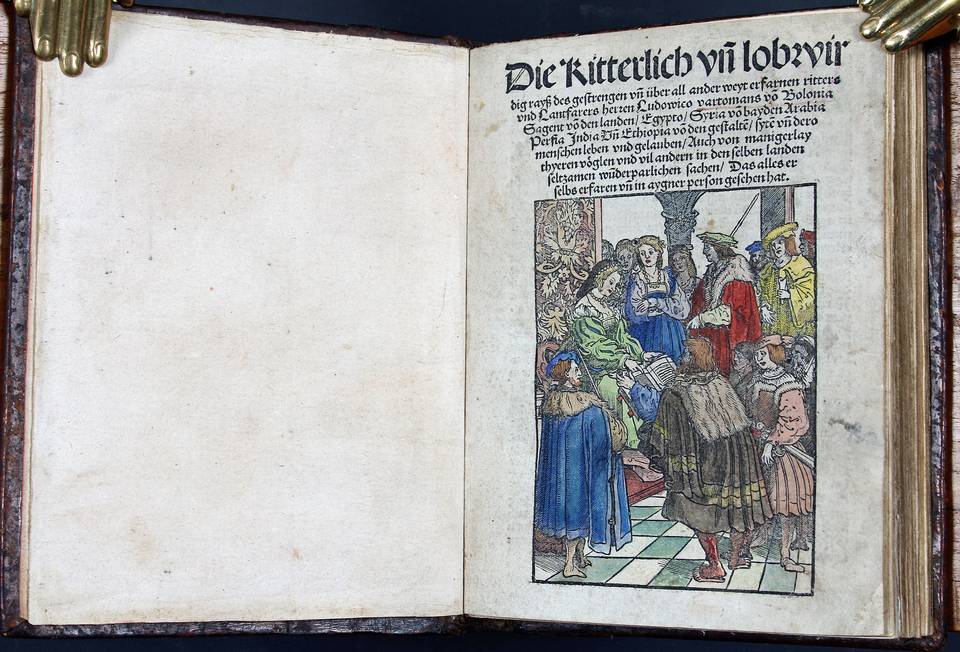 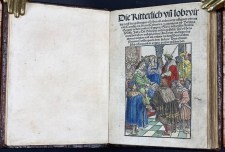 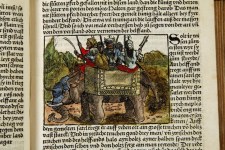 Modern red morocco and in a protective box.

Engraved title page and 45 woodcuts in the text in deep but later colour.

The translation into German by Michael Herr; the woodcuts by Georg Breu

Title page: the author offering his book to Agnes of Urbino, Agnesia Feltria Colonna, married to Fabrizio Colonna, Duchess of Albu and Tagliacozzo.

Condition: our copy is in a modern, signed binding (Ellenport, Harcourt Bindery, Boston USA) and has 2 (a2 and 3) leaves (including 2 images) in printed facsimile on contemporary paper. Six leaves are from another, 1515, copy: p2; p3 and t1-4. The rather course colouring throughout the book is in one and the same hand.


Any early edition of the Varthema is extremely scarce. The present edition is the first in German and the first Varthema in any language that is illustrated. These 45 woodcuts are extremely important. Though informed phantasy, the illustrations add a lot to the attractiveness and value of the book. Seven prints are from Arabia and the Islam and are among the earliest ones of Medina and Mecca.

Lodovico di Varthema went to the (East) Indies overland through the Levant. He spoke colloquial Arabic and acknowledged Islam (Lach I, p 164). He left Venice for Egypt and Syria around 1502. His route was Alexandria, Cairo, Beirut, Tripoli, Aleppo and Damascus. From there he joined a Mameluke escort of a Hajj caravan and made his pilgrimage to Mecca.

The book is of great importance to the Arab world. It contains the first recorded visit by a Christian to Mecca. Dressed as a Muslim Varthema visited Mecca. He visited the grave of Mohammed in Medina travelled to Mecca; describes the city and its holy places and its trade, thereafter the trip overland to Jeddah, the harbour of Mecca.

After the Hajj he shipped in at Jeddah and sailed to Aden visiting also Zebit and Sanaa in Yemen on the way. He was imprisoned for a while at Aden. Varthema arrived in Cambay, India on October 10, 1504. From there he travelled inland up to Calicut in early 1505. After this point his Itinerary becomes vague and his description inaccurate, where he said he visited the East Coast of India; Pegu, Malacca, Sumatra the Moluccas and Java (Lach, Vol I, p 165). Back in India (Cochin) he joined Portuguese services over there and returned to Lisbon (1508) and Rome (late 1508) where he started preparing his book, the Itinerary.

A full chapter is dedicated to Islam; the Arabian peninsula and the Hajj to Mecca (10 leaves and 7 text woodcuts). The images included in this chapter show :

·    (verso b2) the pilgrimage caravan on its way to Mecca

·    (b4) the Mameluke guards defending the Hajj caravan against robbers

There are further chapters on Arabia Felix (Yemen), including his short imprisonment in Aden; another book on Persia including Ormus and Samarkand, another on India, including Cambaya, Goa and Cananor, the use of elephants; a second book on India (Calicut and the unbelievers lifestyle: the Hindus) and a third book on India, including Ceylon and Pegu; Malacca; Sumatra; Banda ; the Moluccas and the life cycle of the most important spices