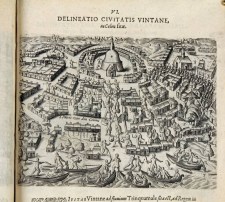 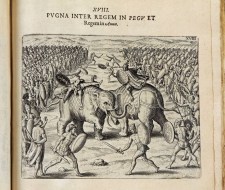 22 plates including double page map of Kandy and

Lacking the last blank. A clean example with crisp prints.

Part VII of the Petits Voyages in Latin. The book encompasses two journals: the one of Gasparo Balbi (pp 43-126) and the other of Joris van Spilbergen.


Balbi was a jewel merchant who travelled the Middle East; the Persian Gulf; India and Burma between 1579 and 1588 searching for business. The book on his "lifelong" experiences was first published in Italian in Venice in 1590 with a second edition in 1600. It is business oriented, including data on products, measurements, prices and harbours. According to Balbi the best pearls are found in Bairen (Bahrein) and Gionfar (Julfar). The original book lately became very valuable because of its naming of various ports and places on the Persian Gulf for the first time. Today these places are known worldwide, including islands of Abu Dhabi like Daas, Das and Sirbeniast, Sir Bani Yas. Also coastal fishers harbours that are world cities today like Diei, Dubai and Rasaelchime, today Ras al Kaima are mentioned here for the very first time in print.

Spilbergen was a Dutch captain (admiral) who in the days just before the Dutch East India Company was established (1602) sailed in 1601 to Sri Lanka (Ceylon, Silon) to forge a business relation with the King of Kandy later sailing on the East Indies and returning to the Netherlands in 1603. His journal was first published in Holland in 1605 with 14 plates, including the engraved title page. In this De Bry version the Spilbergen text is an abbreviation (pp 1-43) of the Dutch original and there are only 12 of the 14 plates from the original publication.

Spilbergen later made and even more famous voyage around the world between 1614 and 1617, harassing the Spaniards in "their" Pacific. The last 15 years of his life he lived in Bergen op Zoom, the small and old city in the South of Holland where I happen to live. His house still stands here.