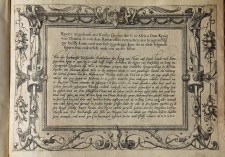 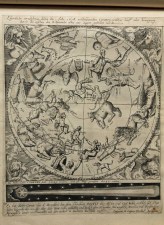 Paper, double folios folded in four. Five watermarks repeat themselves all through the album. The atlas is a contemporary collection of uniformly printed plates on decent paper and in excellent condition.


Hogenbergs Geschichtsblätter constitute a unique phenomenon. They offer an updated and visual image of the West European history between 1558 and 1610 (1622) seen from the Dutch (Low Countries) point of view. These prints were produced in series of 8 and more coherent prints just after and even during the events depicted. Details in some of the images and in the supportive texts at the bottom of each plate suggest and sometimes prove that these were made during the action, for example a siege, and without knowing the outcome as yet (Muller 1863: page 40 and 41). The prints of the French religious wars however were made after the originals by Jacques Perissin and Jean Tortorel (Brunet 23497).

Many of these Hogenberg plates, especially the ones that refer to Dutch history (280 plates) have been used over time in history books like in Aitzinger; Baudart; Grotius and others.

All these plates, collected and put into chronological order were finally printed to make up one book: a historical atlas. To create the chronological order required all the plates were given a new number. In the 1860s Frederik Muller was able to find 7 such books to write up their bibliography. None of these 7 books was identical. Most had 380-390 plates. In the end a total of 474 different plates were identified by Muller that did belong to one of the atlases of the Geschichtblätter. In our set of 412 none is missing as the numbering is continuous.

It will be remembered that the Hogenberg plates were originally made as newspaper reports on war development, to inform the public. Some were made during the sieges and fights, others shortly afterwards. They were engraved, enriched with text in mostly poor poetry, and sold in often coherent series of 6 ; 8; 12 up to 100 plates. Collections of these series like ours must have been made more often but are very rare these days. My great-great grandfather Frederik Muller was the first to describe them. He found a total of maximum 485 different plates that seems to belong to the collection. His study was published in 1863 and based on an analysis of 13 copies, each one similar but slightly different from each other. Old Frederik organized and described the plates in 11 series.

The focus of the prints is on the Dutch Revolt against Spanish dominance and for religious freedom (1568-1648, here the first 50 years only). A similar fight went on in France between the Huguenots and the catholic majority. This Guerre de Religion is extensively documented in the present collection (1540-1598). In the years preceding the 30 year war (1618-1648) which restructured Western Europe, the religious strife involved German states and cities and even an English rise against their King. All that is reported in this collection. But the album opens with Charles I, King of Spain, in his fight against the Moors in Tunis (1535) and the Christian-Muslim animosity returns at the invasion of the Turks in Eastern Europa and the battle at Lepanto(1572).

Constitution in series of the Hogenberg Geschichtblätter atlas